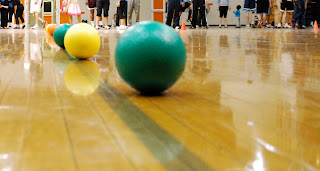 The bell would ring and we’d run out to the blacktop ready to argue for who we wanted on our team.  Glad to be done with the multiplication table for 15 minutes.  It was a game of kickball that released my energy in elementary school, or the occasional game of four-square.  Oh, I loved me some recess back then…

This past Tuesday, 80 adults reenacted recess.  Grown men turned into third grade boys, minus the grass-stained pants. Women laughed at themselves, now mature enough to admit that they were the underdog in the game.  Eight teams of ten players each, battled it out for the title of “Dodgeball Champ.”  Five men and five women made up each team while soft colorful dodgeballs were lined up to separate two opposing teams.  In the end it was Team Albany Park 1 with the most people standing when the whistle blew.

Every adult needs permission to return to recess every now and then.  Friendly competition, full of laughter, raised $1,620 for Village to Village Intl.  A big thanks to Gordon Tech High School for allowing us to use their gym for the event at no charge.

If you’d be interested in having a dodgeball tournament in your neighborhood or town to help support Village to Village Intl., please let us know.  It’s a simple way to help a good cause.  Plus, you just might have some fun in the process.